Cave paintings are designed in such a way to tell a series of events rather like an animation, for example a sequence of painted figures acting out a hunt. This is the first time art ever was used to tell a story, which is what animation does. Albeit the images are not moving but they still successfully explain the movement and ways of life of the cave dwellers.

One particular set of caves – Chauvet Caves in the South of France – is considered a significant prehistoric site of cave art. Discovered in 1994, the cave paintings here are dated from about 30, 000 to 32, 000 years ago and appears to have been used by humans during the Aurignacian and Gravettian periods. Most of the artwork was painted during the Aurignacian period and later in the Gravettian period (25, 000 to 27, 000 years ago) the only marks made seem to be footprints (the oldest datable footprints), charred remains of hearths and carbon smoke stains. Fossilized bones and paw prints from cave bears are also visible, along with evidence of where they slept and other animal skeletons.

The cave has particularly good quality artwork due to a landslide that hid the entrance of the cave until its discovery in 1994.

Like most cave art there are no complete human figures, although Chauvet does have an incomplete “Venus” figure, and a minotaur type figure. Hundreds of animal paintings have been discovered here with at least 13 different species, including some found in no other cave paintings. Unusually, instead of the usual herbivore animals (horses, mammoths, cattle, etc.) these cave walls depict animals of a predatory nature – for example cave hyenas and lions, panthers and bears. An identifiable butterfly or bird shape can also be find, along with hand prints and abstract lines and dots.

Relating back to animation, there are scenes of animals in action, for example two woolly rhinoceroses horn butting. Archaeologist and expert Marc Azéma of the University of Toulouse–Le Mirail in France says, 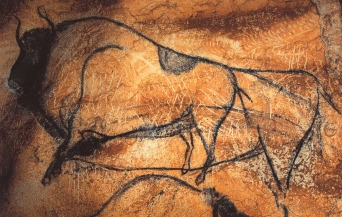 As the torches lighting the cave flickered over the images they would have the appearance of movement. On top of this, a painting ten metres long describes a hunting story beginning with stalking lions with other animals nearby. Later the animals are running and chasing one another, rather like key frames in animation. Another proof of this statement is an eight legged bison, giving the impression of one bison in two different positions of running.

It is clear that cave men were certainly trying to make a sense of movement within their paintings: the very earliest form of animation the world ever saw. 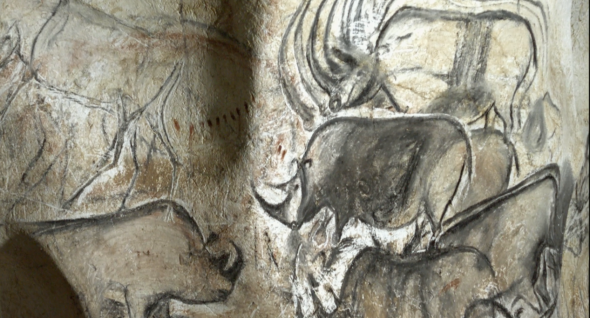 A film has been made about the Chauvet caves – Cave of Forgotten Dreams.

06 Oct This entry was published on October 6, 2012 at 6:13 pm. It’s filed under Uncategorized and tagged animation, Aurignacian, cave of forgotten dreams, cave paintings, chauvet caves, Gravettian, prehistoric art. Bookmark the permalink. Follow any comments here with the RSS feed for this post.

One thought on “history of animation : cave paintings”